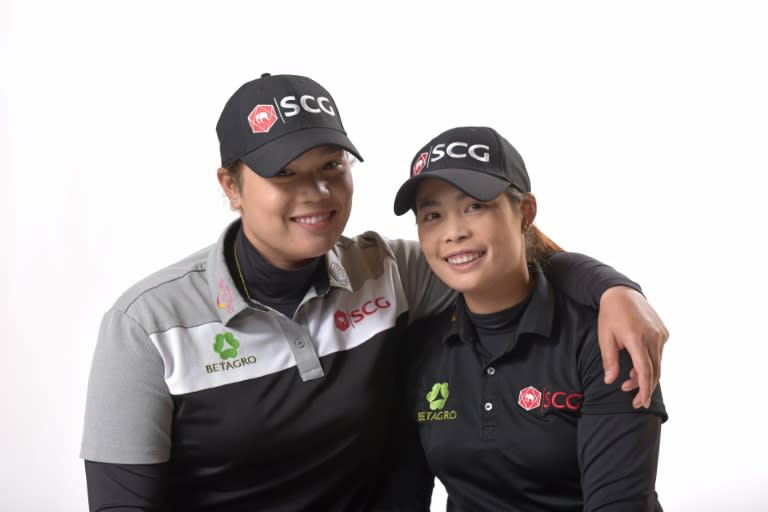 Sisters Moriya (R) and Ariya Jutanugarn of Thailand will play together in the Dow Great Lakes Bay Invitational, the LPGA's first official team event that tees off on Wednesday (AFP Photo/DONALD MIRALLE)

Los Angeles (AFP) - The LPGA's first official team event tees off with a pair of sister acts and a veteran Solheim Cup duo spicing up the field for the Dow Great Lakes Bay Invitational.

The 72 two-woman teams will compete for a $2 million purse at Midland Country Club in Midland, Michigan, where Wednesday's first round and Friday's third round will feature an alternate-shot format and the second and fourth rounds will be best-ball.

The teams won't go head-to-head in match-play style, instead they will play out each hole for a stroke-play score.

"I think just the anticipation of this event has been all year," said Canadian Brooke Henderson, who will team with compatriot Alena Sharp.

"I think stepping on the first tee tomorrow there's going to be a lot of adrenaline."

Thai sisters Ariya and Moriya Jutanugarn will play together and are grouped in the first and second round with US sisters Nelly and Jessica Korda.

"I've always wanted to play some sort of team event with my sister and what a great opportunity to be able to do that," Jessica Korda said, adding that it's great preparation for the Solheim Cup match play showdown with Europe for which both Kordas are already qualified.

Team Europe’s Solheim Captain Catriona Matthew and vice-captain Suzann Pettersen will play together, Pettersen returning from maternity leave for her first LPGA appearance since the Tour Championship in 2017.

They'll be playing alongside the Swedish duo of Caroline Hedwall and Anna Nordqvist.

Some of the world's top players, including world number one Park Sung-hyun, are skipping the event as they prepare for next week's Evian Championship in France, which will be quickly followed by the Women's British Open.

South Korea's Ko Jin-young and Australian Minjee Lee -- at number two and three in the world -- are the highest-ranked team.

Former world number one Lydia Ko of New Zealand and Chun In-gee of South Korea -- who own four major titles between them -- will team up.

Ko, winner of 15 LPGA titles, was looking forward to having the support of a teammate.

"Golf is a very individual game, it's just you and your caddie out there," she said.

"It's nice that you have a partner that you can rely on, and even if it doesn't go your way, you're out there supporting each other. I think that's the great thing about team play."