Essay My story of the MODERN 3

My Story of The MODERN 3: I crossed George Washington Bridge on foot

We had our family gathering for Thanksgiving dinner at Jim’s Chelsea apartment in 2018, following which I was eager to accomplish my yearlong plan to cross GWB through the south footpath.

After getting familiar with the local streets, I went to the GWB bus terminal at 178th St and Fort Washington Ave in the morning of November 29, and then walked to Cabrini Blvd which is the west end of 178th St just before Hudson River and the Bridge. I tried hard to find the entrance to the pedestrian walk of GWB, the behemoth, which appeared hanging far above my head!

In early morning I couldn’t find any people in the streets, nor even the high way workers.to ask where to climb to the bridge footpath, so that I had to return home without success.

Exactly seven days from the last attempt, I returned to the George Washington Bridge Bus Terminal and from an employee there had good information on how to climb the Bridge footpath.

From the exit of the Terminal I started to walk in the 178th Street to the west until crossed Cabrini Blvd, kept walking a few steps until saw an entrance sign to GWB. There I started to climb initially clockwise, and then counterclockwise directions until stepped into the pedestrian walk on the south side. There I kept walking toward the west for 30 minutes until arrived at the Hudson Terrace of Fort Lee, NJ.

Originally I meant to make walk through the streets down the Dong Bang Grill, but it was cold, windy, and even desolate without seeing people in the street.

Therefore I symbolically put my two feet on Hudson Terrace (street), next made 180° toward the east (NYC direction) and made my return walk without stopping until I met the exit to the entrance. From the gate I kept walking through 178th street toward Line A subway station at 175th St. It was my memorable GWB crossing, but not completely satisfactory since my destination was Dong Bang Grill, 1616 Palisade Ave, which I couldn’t arrive at.

In the next early spring we came back to Manhattan again for our family trip to Turks and Caicos Islands, before which I planned another GWB crossing.

As usual I took A line from the 14th St Subway Station to 175th St, where I walked through the connection to GW Bridge Bus Terminal, from which I came out to Fort Washington Ave, next to 178th St, and then passed Cabrina Blvd, then found the pedestrian and bicyclist entrance to the George Washington Bridge.

Once up on the sidewalk, I started to walk westward toward Fort Lee. It was fairly mild day without strong wind, letting me walk comfortably and leisurely.

Upon arrival at the exit, I stepped upon Hudson Terrace, went to Bruce Reynolds Blvd, next to Palisade Ave until found the sign of Dong Bang Grill. It was still early in the morning, and the place was closed.

On my way to return to the Bridge, I found Caffé Bene at 1636 Palisade Ave, and had a dish of whipped cream with strawberry and two glasses of cold water.

Quite refreshed, I restarted my return walk through GW Bridge, to the Bus Terminal, and then to 178th St Station.

Why did I have to cross GW Bridge twice, which couldn’t be considered as pleasant afternoon picnic? That was because I wanted to explore the bridge and the city of Fort Lee more until satisfied. Shall I try it for the third time? Never say never, but probably not unless there is any unexpected pressing need for it.

Crossing Cabrini Blvd: Obviously you can’t fly or jump from this street to the Bridge

Entrance sign to GWB: Without this sign, I can never, ever, set my feet on the Bridge!

Beginning to climb in a circular path initially in the clockwise, next in the counterclockwise directions after entering the tiny gate

Now I am in the formal pedestrian walkway of GWB!

Photo Shoot??? By the first pedestrian from the opposite direction

I exited the pedestrian walkway and stepped upon Hudson Terrace of Fort Lee. I looked at the left side and saw a tall building. It’s dreary and cold, and so I didn’t feel like street walking.

This is the south view at the end of the bike and pedestrian path. Do you see the tallest building? It is one of the twin MODERN. How did I know that I will be settling there in three years?

So I began to return

The walkway ended at the exit to the street

The next year in March I made my second GWB crossing and entered Fort Lee. I found the Dong Bang Grill which had a small heap of remaining snow. 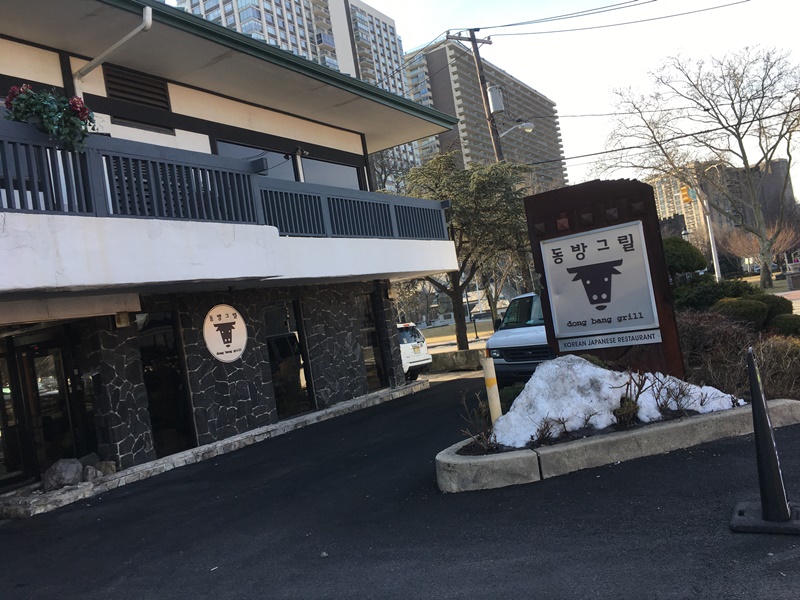 So I have accomplished my objective, been satisfied and returned.